The Jolly Trolley and it’s bright and colorful vehicles are a local icon, as well as a safe & convenient transit service, and are a common site between Rehoboth Beach & Dewey Beach during the Summer months. This story follows the history of the Jolly Trolley of Rehoboth Beach & Dewey Beach, when it was started, by who and why, and how it came to be.

The original Jolly Trolley vehicle, JT #1 as it now named, was created in 1970 as a means to provide a tour service to local residents and visitors in Rehoboth & Dewey Beach. Mr. & Mrs. Rodgers, who lived in Dewey Beach, were the original owners and operators of the Jolly Trolley, and enjoyed giving tours around town for newcomers and residents. 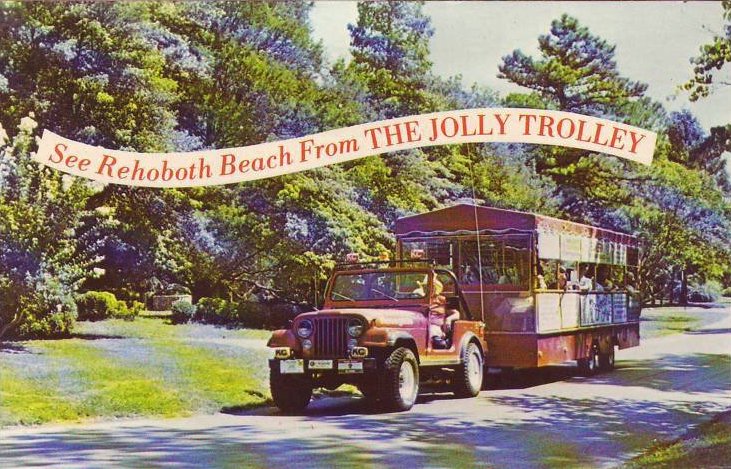 - The Jolly Trolley on a Rehoboth Beach postcard circa 1970.

More than 15 years later, Dominick Pulieri, the founder of Rehoboth Beach’s Iconic Pizza pie, Grotto Pizza, purchased the Jolly Trolley in the late 1980’s. Dominick saw the potential for advertisement on the Jolly Trolley, as it was already a popular attraction at the beaches, and an instant eye-catcher on the roadways.  To add to the appeal of the purchase, his mother loved the unique trolley vehicle, and enjoyed having open air tours of Rehoboth Beach. Dom’s plan was to set up a shuttle route, and offer local tours with the Jolly Trolley, but he quickly realized that owning and growing a booming pizza business and operating a transportation service at the same time was a lot to handle!

Enter David & Christine Hastings, the President and Vice President of Transit U Incorporated, which operates the Jolly Trolley Transportation Services.  In the early 1990s Grotto Pizza was running advertising on the Aatcos Sign boat, which was owned and operated by David & Christine Hastings. The Aatcos, or Ms. Aatcos as she was so fondly named, became a regular site off of Rehoboth & Dewey Beaches during the Summer months, and was a unique & popular form of advertising for local businesses looking to capture the eye of their sunbathing patrons. 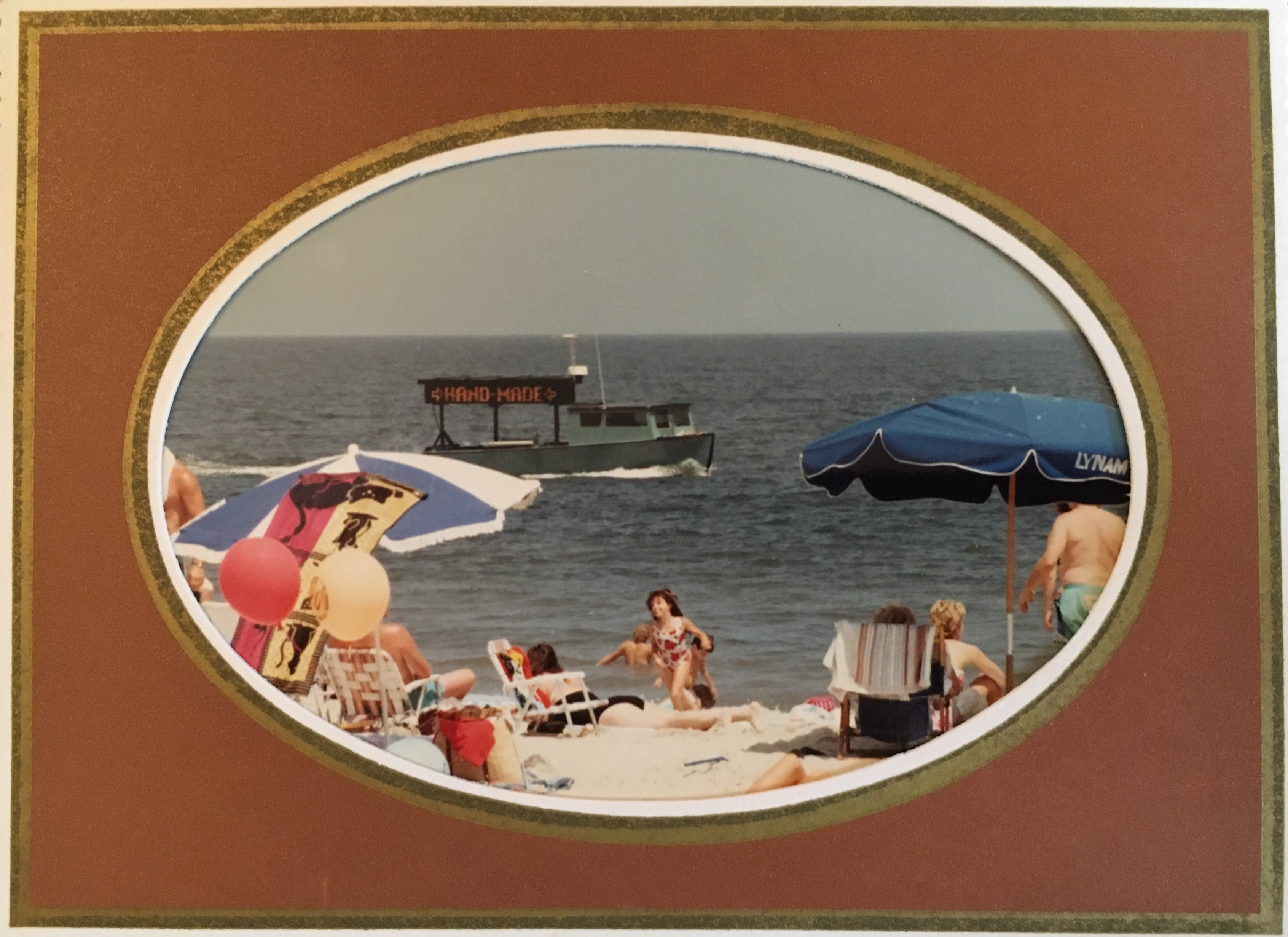 In 1991 Mr. Pulieri approached the Hastings to see if they were interested in managing another advertising service, the Jolly Trolley, and at first he was met with some hesitation. However, from that moment the Hastings started to form a business plan that would grow into the Jolly Trolley that we all know today.

After managing the Jolly Trolley in 1991, and with a growing family, David & Christine, were approached by Dominick Pulieri in March of 1992 and asked to take over the business full time. They accepted, and stepped off into the transportation industry without looking back! David Hastings quickly moved forward with his advertising and entrepreneurial experience, adding advertising panels to the Original Jolly Trolley to further solidify the Jolly Trolley in the local community.  Christine Hastings was in her element working with and amongst local residents and visitors to provide safe and reliable transportation between Rehoboth Beach & Dewey Beach. 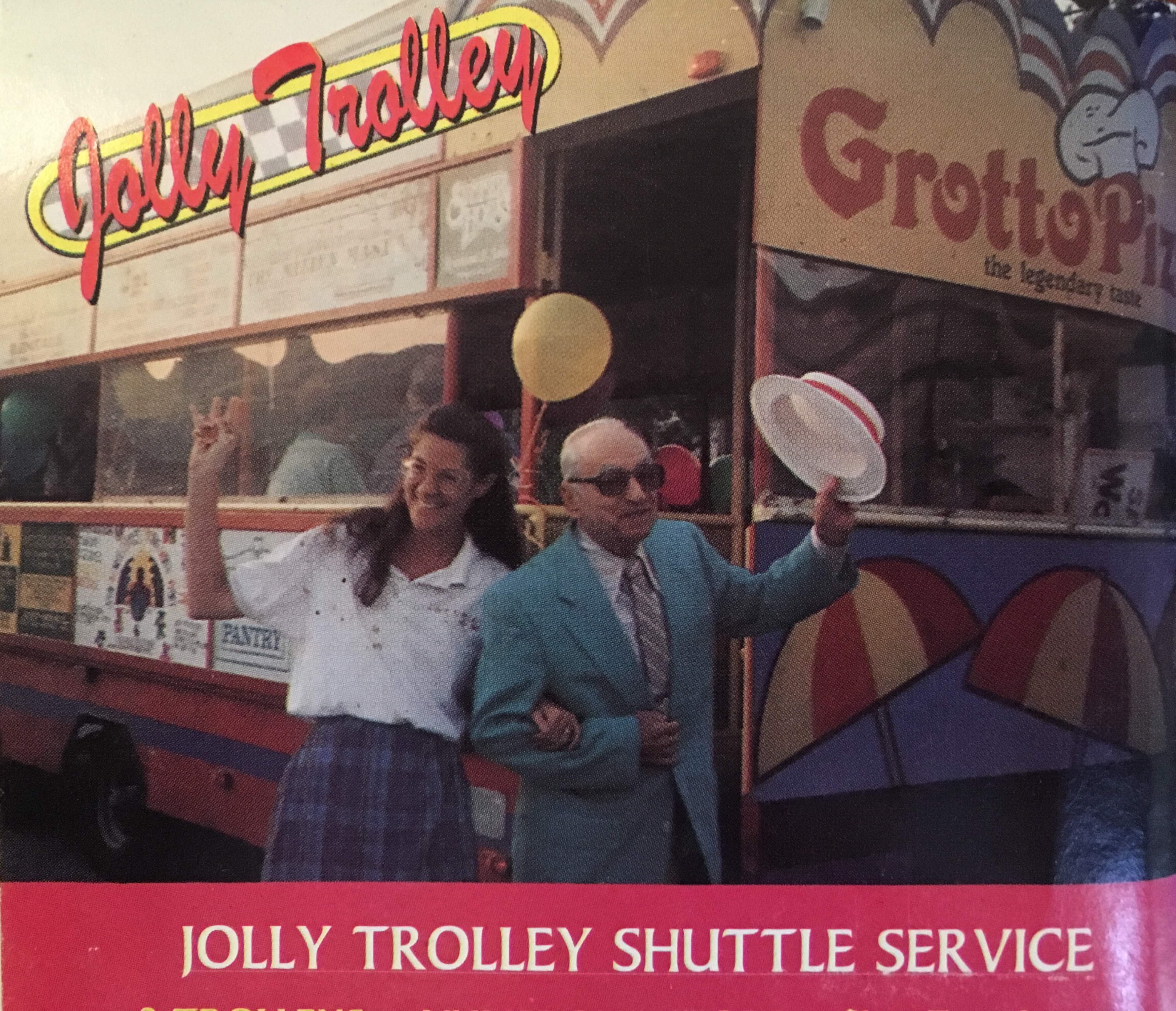 The Hastings Family created the Jolly Trolley Fixed Route Shuttle Service with JT #1 in 1992 and are now the proud owners of a growing vehicle fleet of more than 24 vehicles of all sizes. The Jolly Trolley & Transit U Inc. operate three separate businesses including their Fixed Route Shuttle between Rehoboth Beach and Dewey Beach, as well as a professionally chauffeured inter-state charter service providing transportation for thousands of weddings, special events, and airport transfers each year, and a school bus service contracted with the Cape Henlopen School District.

The Jolly Trolley has seen Rehoboth & Dewey Beach grow from a sleepy seasonal beach town to the year-round popular beach destinations that they are today. Every Summer many Residents & Visitors alike rely on this fun, local, and always Jolly transportation service for their travel plans between Rehoboth & Dewey Beach, which they can rely on for many years to come!

Reminder: Be sure to check out our Calendar of Events for more area "happenings".

Rehoboth Beach and Boardwalk will be open for walking and exercising only between the hours of 6 AM - 10 PM. One must wear a mask while on the boardwalk starting May 22.

At 5pm, May 22, the beaches will be opened for swimming and sunbathing.  Please follow 'social distancing' guidelines.  Masks are suggested.  Masks must be worn on the boardwalk.

****  Try the following link to watch movies at home through The Movies at Midway:  https://moviesatmidway.com/.

Take Our Survey And Win A Prize